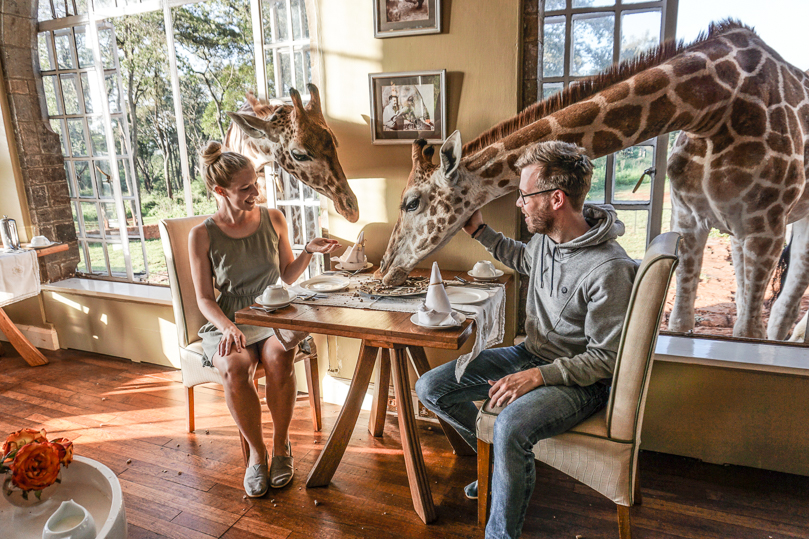 Breakfast with Giraffes (all you need to know about Giraffe Manor)

When we saw the first pictures of people having breakfast with giraffes at Giraffe Manor, I got totally excited.

We knew we had to visit this place!

But at the same moment, we were really skeptical.

Getting so close to wild giraffes to be able to take selfies – How can that be animal-friendly?!

You need to know that I love everything that has to do with animals but more importantly, the animals themselves!

So we started to do some research on the famous Giraffe Manor in Kenya and put all you need to know for having breakfast with giraffes in this post. 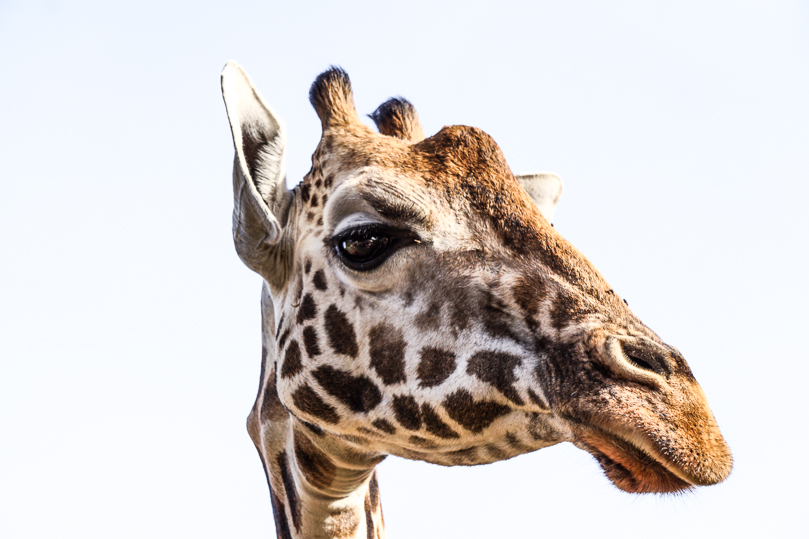 The Giraffe Manor was constructed in 1932 modeled after a Scottish hunting lodge.

In 1974 it was bought by Betty and Jock Leslie Melville, two Americans working in Kenya.

They soon found out that 3 wild Masai giraffes lived on the land they had bought which was when they got interested in giraffes.

It didn’t take long until Betty and Jock heard about the endangered Rothschild giraffes and that some are living on a piece of land soon to be sold.

The Leslie Melvilles immediately adopted the baby giraffe Daisy and the second one followed soon after and was called Marlon.

Growing fond of their foster children they soon started to run a breeding programme to reintroduce the Rothschild giraffes back into the wild – the AFEW Giraffe Center.

Today part of the land is run by the African Fund for Endangered Wildlife (AFEW) which was founded by Betty and Jock in 1979.

AFEW’s VISION: A Kenyan population
in harmony with nature and living sustainably.

They are still running a breeding programme to assure the Rothschild giraffes existence in Kenya.

Calves born in the Giraffe Center are reintroduced into the wild in one of Kenya’s conservation areas at the age of 2 – 3 years.

Today there are about 10 giraffes living at the 60-acre sanctuary.

The population in the wild is stable nowadays with about 780 wild Rothschild giraffes.

At the AFEW Giraffe Center every one of the giraffes is named after people who have contributed significantly to the work of the fund. 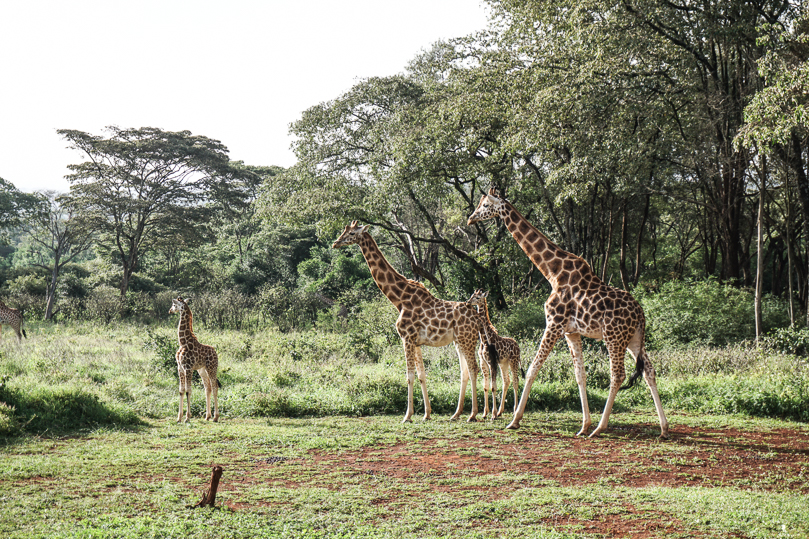 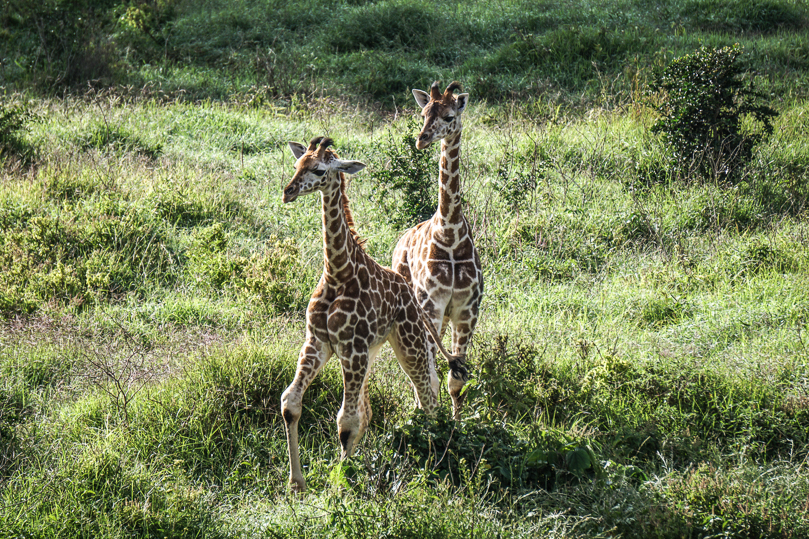 Giraffe Manor as a Hotel

The Manor itself is run as a boutique hotel since 1983 and is owned by the Carr-Hartley family nowadays.

Arriving at the Scottish hunting lodge guests feel like in a different area impressed by the Manor’s extraordinary appeal.

The hotel has a well-attuned team of 65 members including 5 chefs, who try to read every wish in their guests’ eyes.

In total, the boutique hotel offers 12 beautiful rooms spread along the historic Main Manor and the Garden Manor, built in 2011.

While the Main Manor is the first place to go for the giraffes in the early morning the Garden Manor is a bit more secluded.

The highlight for every guest is, of course, the breakfast with giraffes! 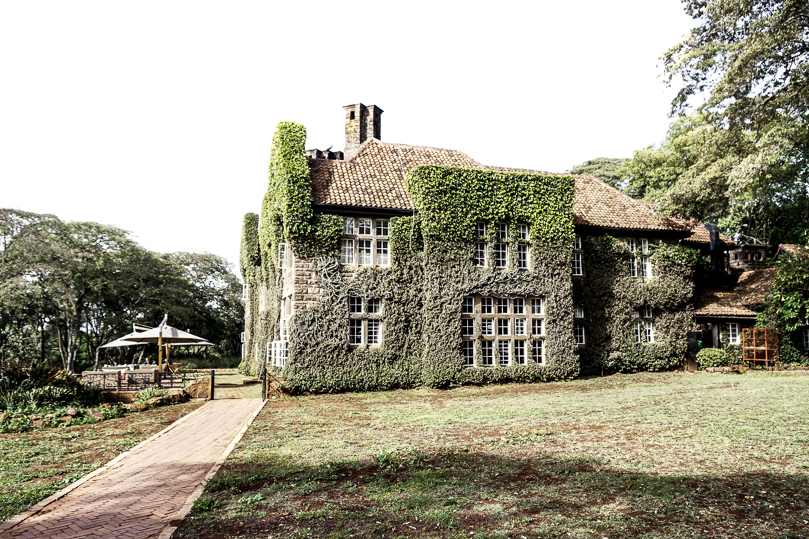 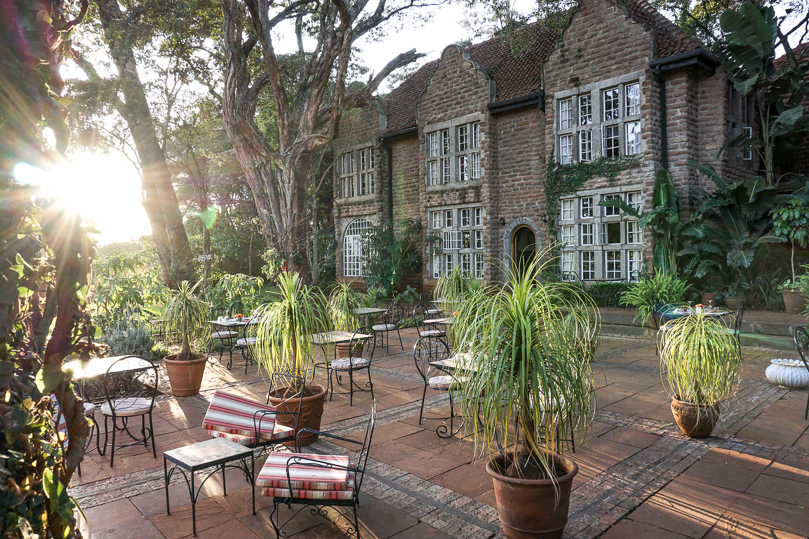 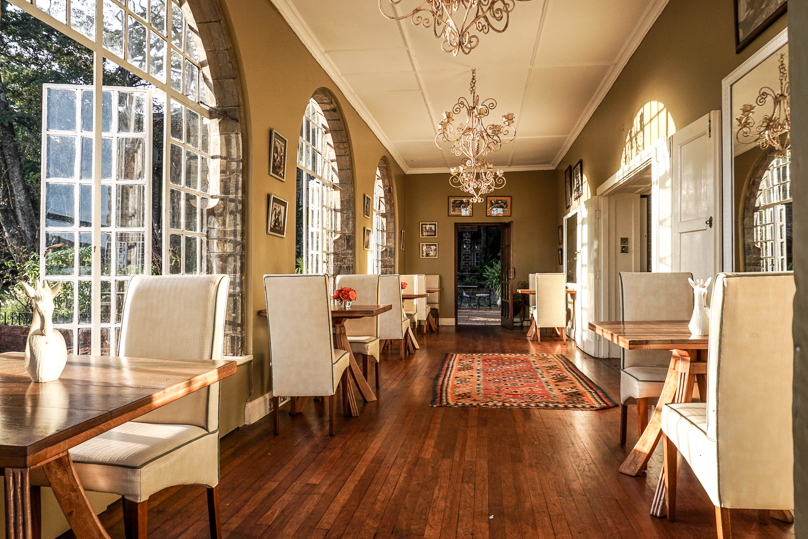 Each room at Giraffe Manor is beautifully decorated right down to the last detail and all are named after one of the giraffes living on the property.

We stayed in Jock’s room on the first floor, which is the perfect place to feed the giraffes before they are heading to the breakfast room. 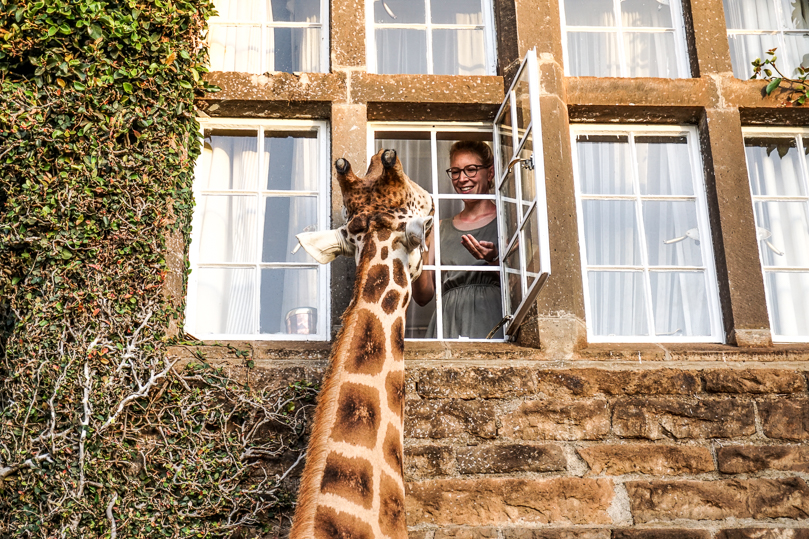 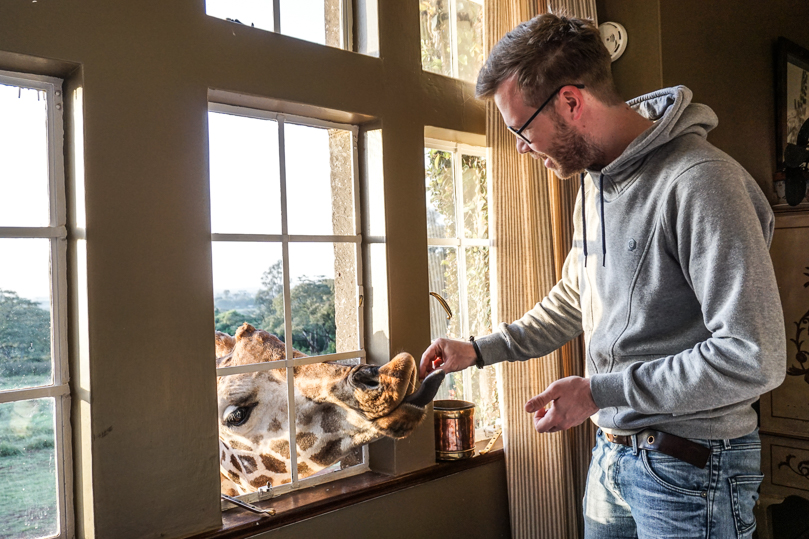 The giraffes know the exact schedule and start coming over to the Manor for some treats at the same time every day and this means early mornings also for the guests.

At 6 AM in the morning the first giraffes are walking along the property for the famous breakfast with the world’s largest animal. 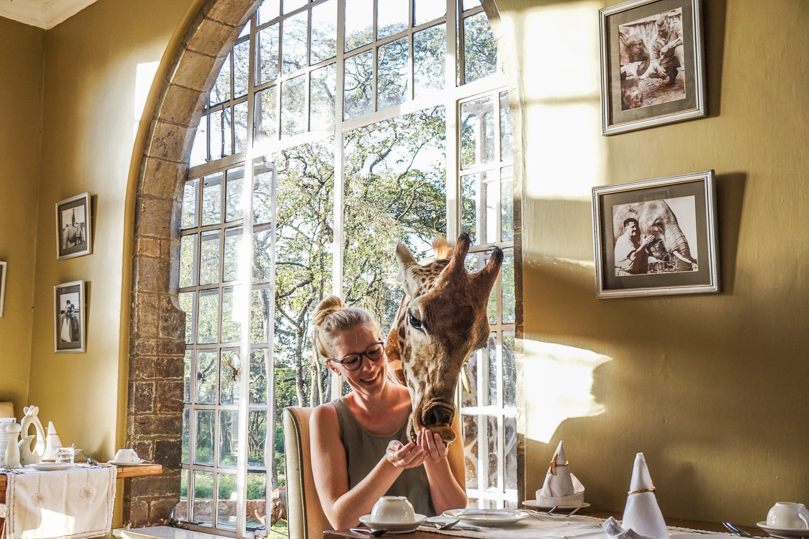 They stay as long as it pleases them and are free to walk back to the sanctuary ground whenever they want to.

Needless to say, most of the giraffes stay as long as there is food on the table. :D

Those long-necked blondes eat different leaves from the trees available on the property and at the Manor they get pellets consisting of oat, pan and molasse.

Usually, the feeding starts at 6.30 AM and the staff is prepared to refill your bowl with more pellets if you & the giraffes can’t get enough. ;)

The actual breakfast for the guests is as well already prepared but to be honest who can think about eating when you have the chance to be eye-on-eye with those beautiful creatures.

For about 30 to 60 minutes we adored the Rothschild giraffes stretching their long necks into the windows to get some treats.

Extra tip: If it’s a little too crowded in the breakfast room go to the foyer with your pellets.

Many of the giraffes pass by the entrance looking for food. 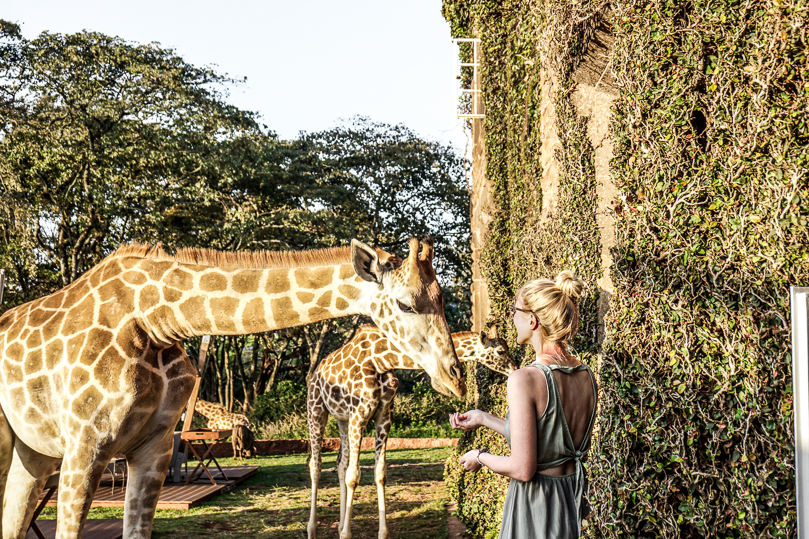 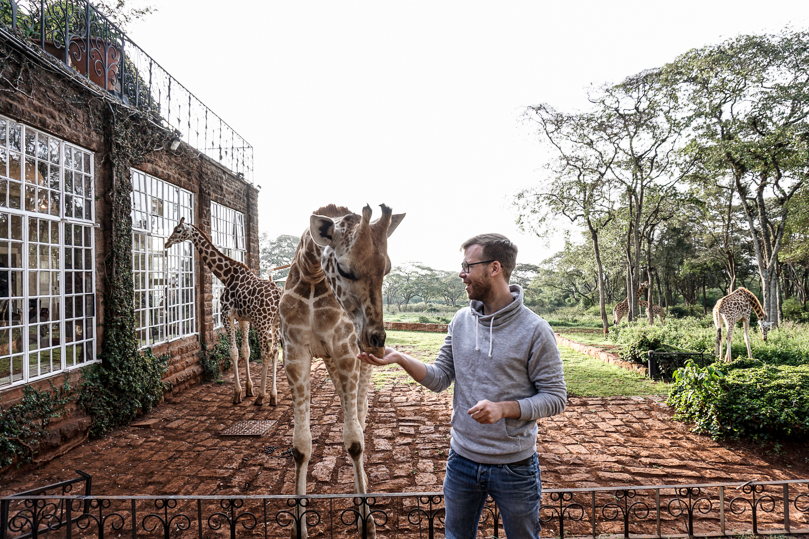 In the afternoon, around 5 PM, you can enjoy tea & coffee as well as cakes and amazing scones on the terrace.

Be aware that the giraffes now you’re out there.

It won’t take long until they will stop by for another molasse pellet, or two. ;)

At any time the staff of Giraffe Manor is around not only to refill your pellet bowls but also for the safety of the guests and the giraffes.

You need to treat the animals with respect and be really careful around them.

A giraffes kick can kill a lion and some of the giraffes can get mean and might give you a headbutt which is really dangerous.

Like one of the staff members used to say ‘No food, No friendship!’.

Anyhow, some of the animals are very gentle and you can even touch them and get a kiss (only for a treat of course). ;) 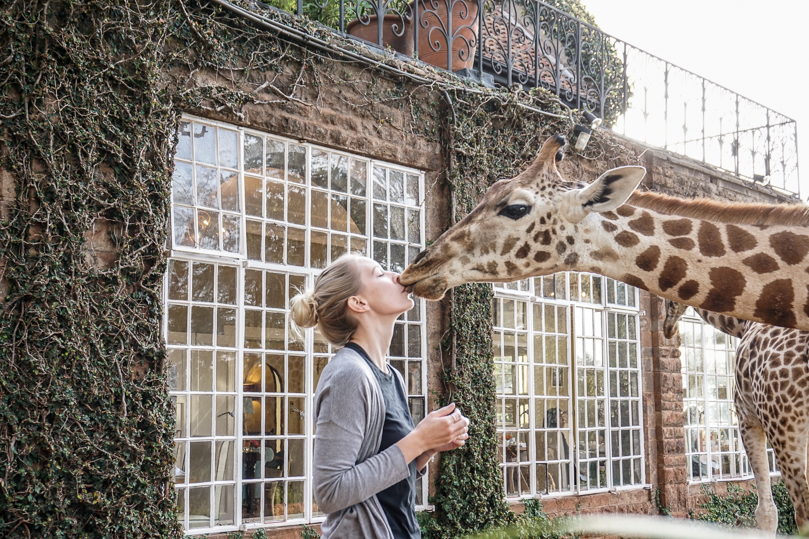 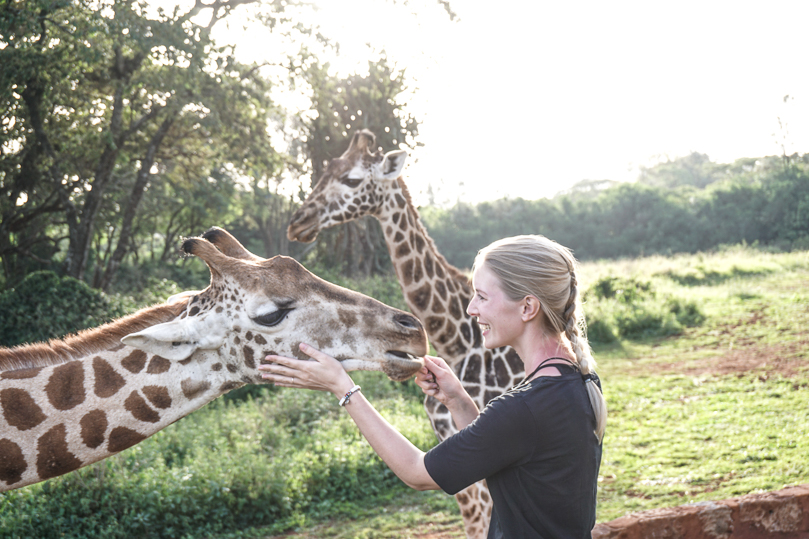 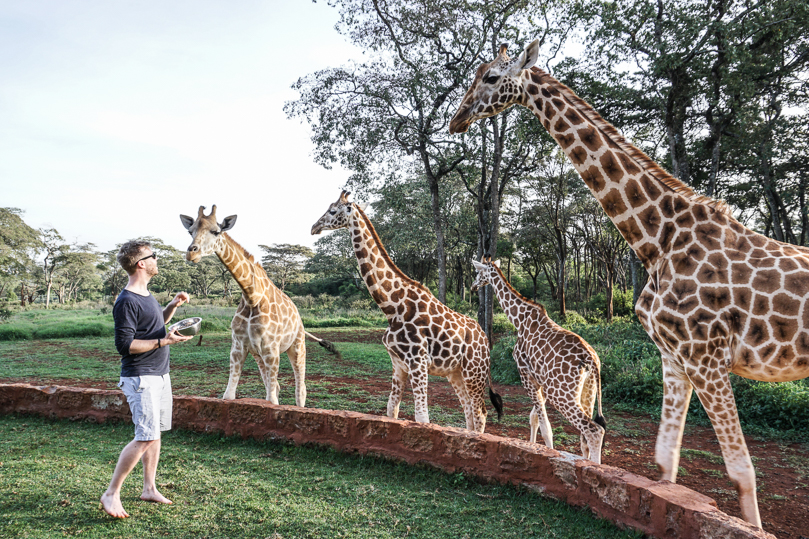 How to Book a Room at Giraffe Manor

We booked our room 10 months in advance and that’s definitely what we recommend you to do!

The Manor is one of the most popular places in Nairobi and is completely booked most of the time.

So make sure to check the availability one year in advance.

You can book your room through the Safari Collections official website.

The price per night starts from $565 per person.

However, we would immediately spend another 2 days at this amazing place.

How often do you get the chance to wake up for breakfast with giraffes? ;)

How Long to Stay at Giraffe Manor

We stayed 2 nights at Giraffe Manor and that’s the exact amount of time you need to fully enjoy this wonderful experience!

Staying 2 nights gives you the opportunity to spend breakfast with the giraffes twice and you have one afternoon for a guided tour or a visit at the AFEW Giraffe Center.

We also recommend staying one afternoon at the Manor for your afternoon tea while interacting with the giraffes once more. ;)

On your last day make sure to visit the David Sheldrick Wildlife Trust which is doing amazing work Raising Elephant Orphans!

We had an amazing time with those beautiful long necked blondes at Giraffe Manor.

Our stay was one of a kind and we took so many great memories with us!

If you want to experience an unforgettable trip we can absolutely recommend this place.

Let us know your most amazing experience with wild animals in the comments.