Christmas in Austria at Lake Wolfgang (The Romantic Getaway)

It is this time of the year again. When everyone is humming Christmas songs and the streets are illuminated by twinkling fairy lights. Tempting aromas of roasted almonds, gingerbread, and delicious hot punch lie in the air and everyone is in the festive spirit.

After spending last Christmas in Southeast Asia Berni and I are super excited about celebrating Christmas in Austria this year. We have already started December with Austrian traditions and want to enjoy the Christmas season to the fullest. December 1st we baked our first range of Christmas cookies and we’ve visited one of the most romantic Christmas markets in Austria enjoying the Christmas spirit and the delicious hot punch.

If you are not yet convinced that you should plan a trip to Austria during the Christmas season keep on reading! We summarized everything you need to know for a romantic getaway in Austria. Including the most important customs and why we do NOT believe in Santa Claus.

Christmas in Austria at Lake Wolfgang – Our Secret Tip

Lake Wolfgang, which is situated in the Salzkammergut spread among Upper Austria and Salzburg, is only 50 minutes from Salzburg city. It is mostly known as one of the most famous summer destinations in Austria. However, the lake and the surrounding villages transform into an enchanted Christmas area at the end of November. The spectacular lake and the 3 picturesque towns Sankt Wolfgang, Sankt Gilgen, and Strobl will definitely spark the Christmas spirit in you. ;)

The first thing that will catch your eye is the impressive and huge lantern in the middle of lake Wolfgang inflamed by the light of peace from Bethlehem. The most contemplative sign which is lightening the night. Boat rides are connecting the 3 villages at Lake Wolfgang and the lights from the Christmas markets are almost leading the boat the way. While you can still get a glimpse of the mountain backdrop before darkness is falling. 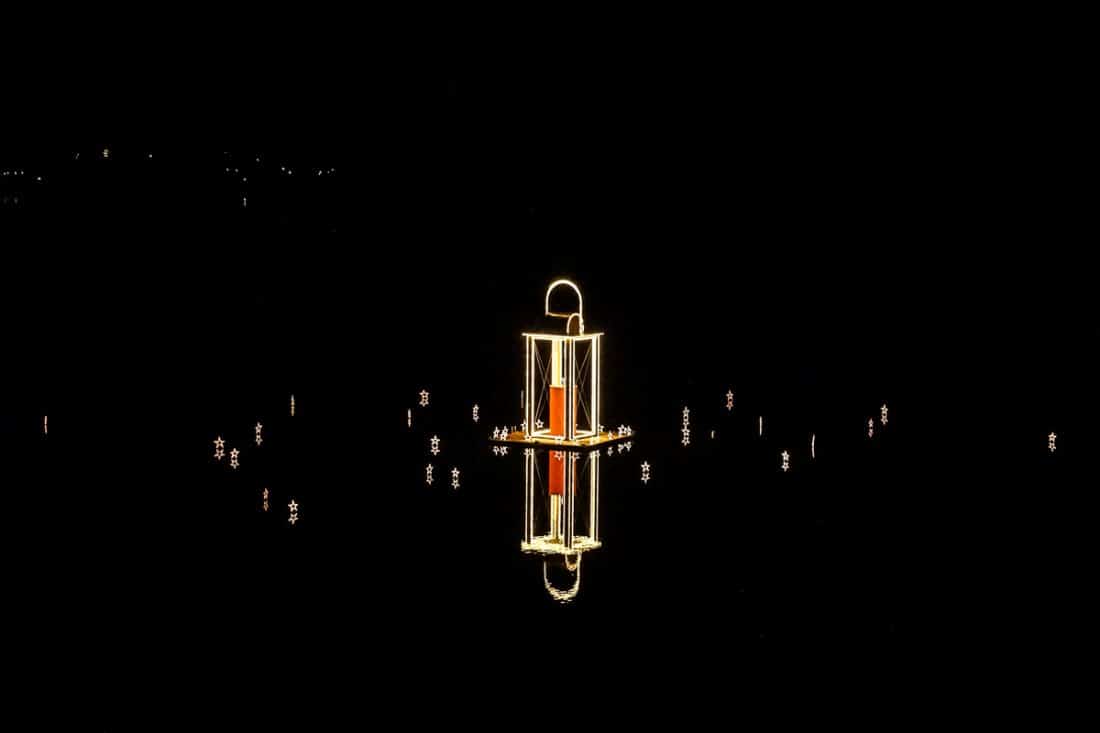 While St. Wolfgang’s cozy and rooted atmosphere is gathering the most visitors, St. Gilgen presents itself in a stunning baroque Christmas glory. The idyllic Strobl is transformed into a picturesque Christmas crib town.

After walking through the magnificent gates of St. Wolfgang the streets are lit with torches and lanterns guiding the way. Traditional customs are celebrated and wind ensembles play Christmas carols. Can it even get more reflective?

If you want to join a torch-lit walk, every Monday guided tours are offered along the centuries-old pilgrim route into the mountains.

Our tip: Make sure to spend a Wednesday at St. Wolfgang, when the electric light is turned off and the entire town is illuminated by candles and lanterns. It can’t get any more romantic! 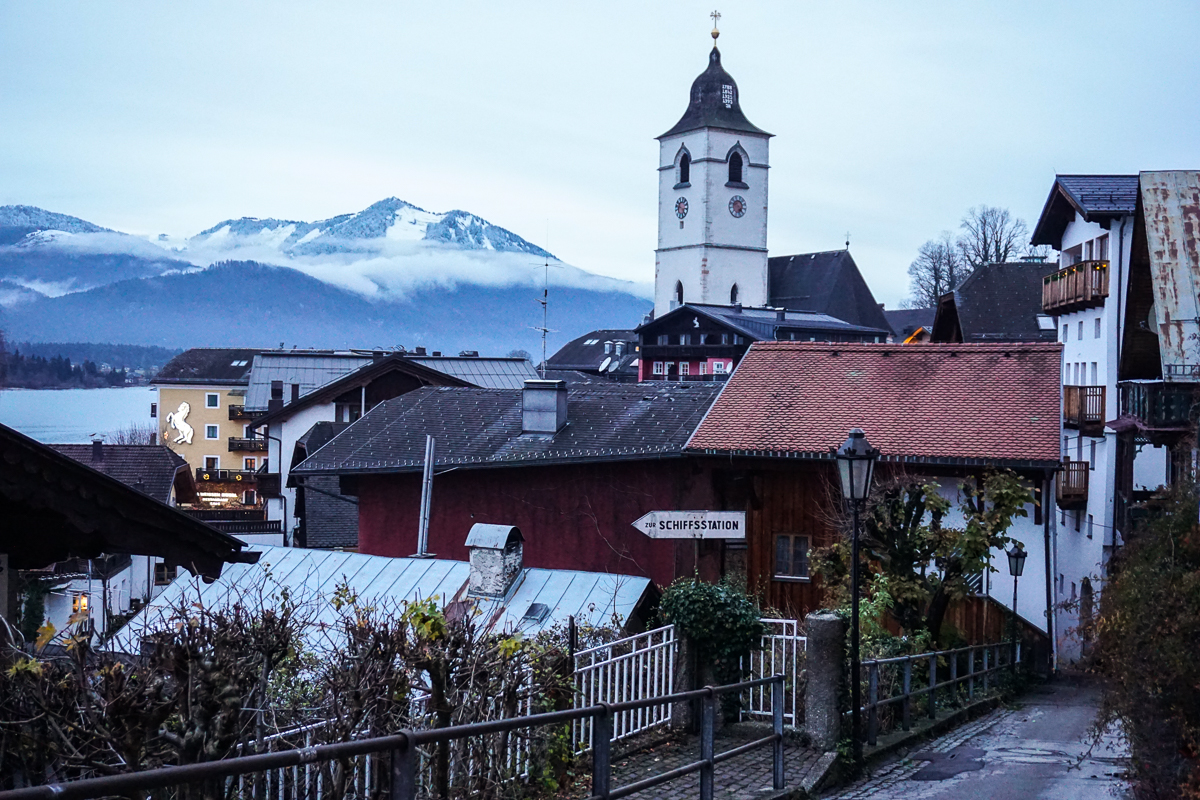 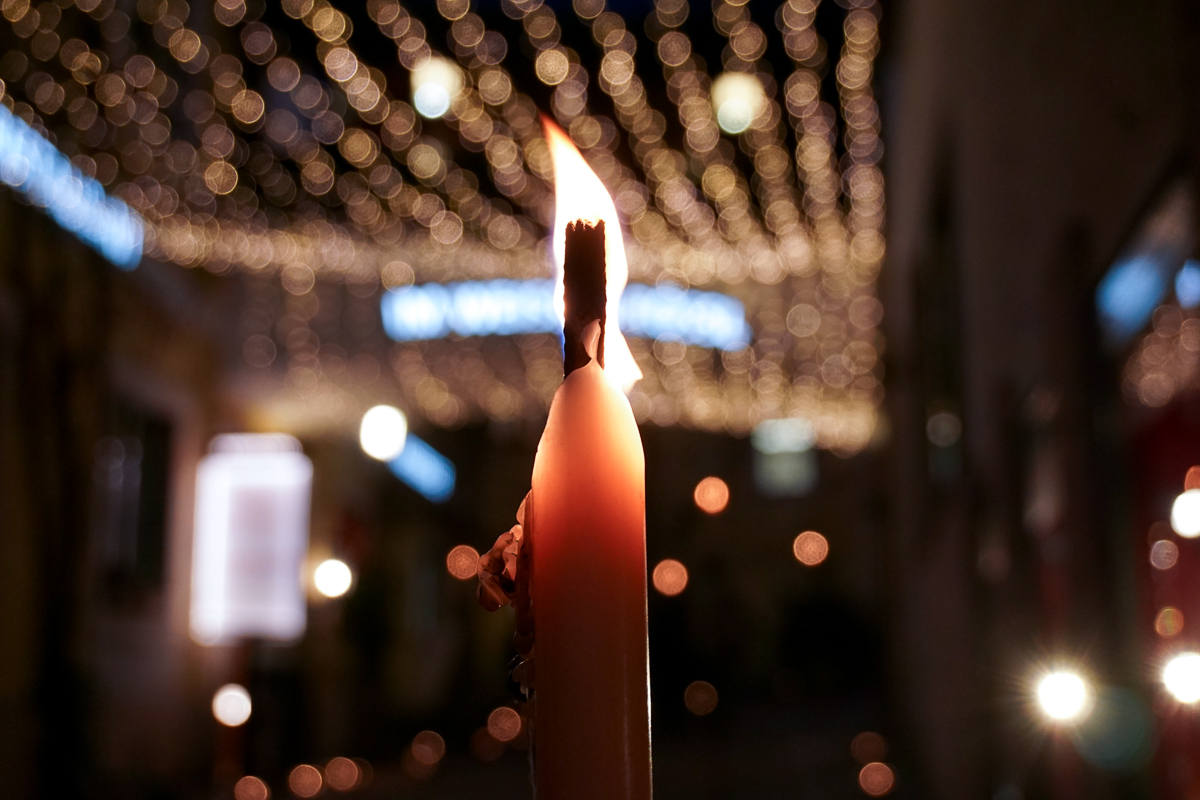 The Market at St. Gilgen is lit up by the light of more than 50 huge candles while fondly decorated Christmas stands are covered in baroque paintings. At the wine arbor, wrapped in warm blankets, you can enjoy a glass of delicious wine while watching the market bustle.

If you want to enjoy the view over the illuminated village and the lake head to the ’12er Horn’ cable car. After a 15 minutes ride, you will be surrounded only by the silence of the mountains.

In Strobl, the iconic Christmas comet will lead you the way through the Christmas market. While you are passing the wooden market stands watch out for a special Christmas gift. Especially art handicrafts, culinary specialties, or traditional local clothing.

Make sure to pay a visit to the Christmas crib exhibition where old treasures are exhibited. Another option you should not miss out on is the craftsmanship exhibition. Most importantly, try one flavor of the hot punch. In Strobl, you can enjoy your warming drink right on the lake – on a gigantic raft. 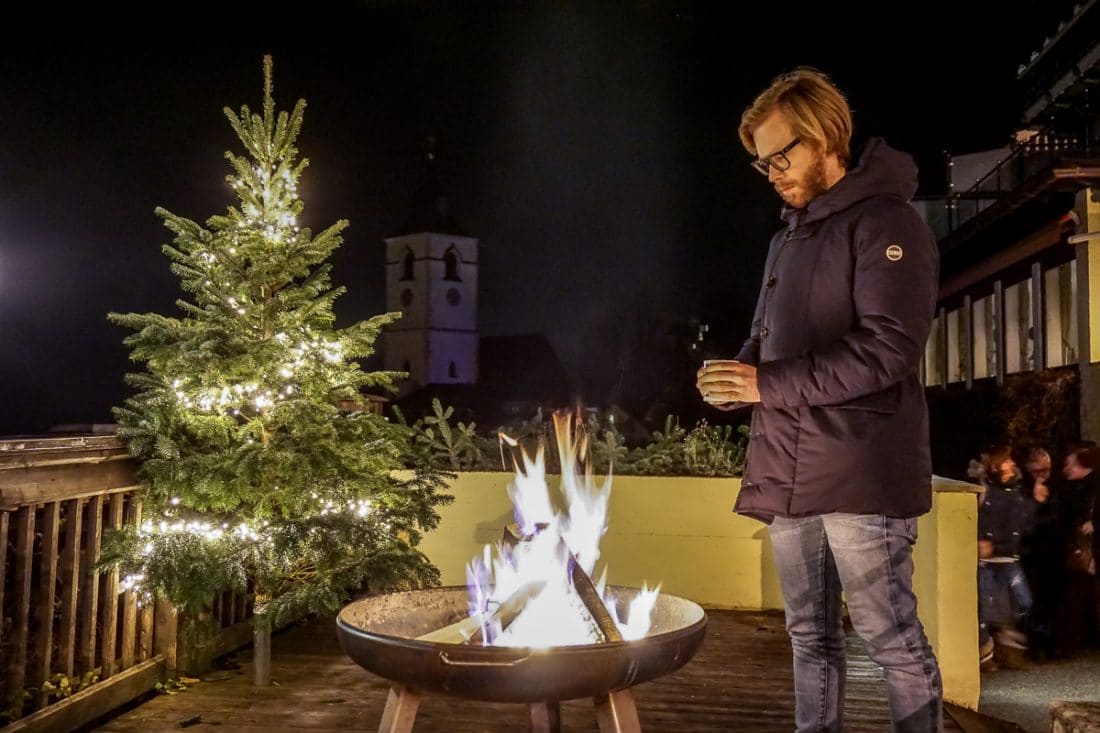 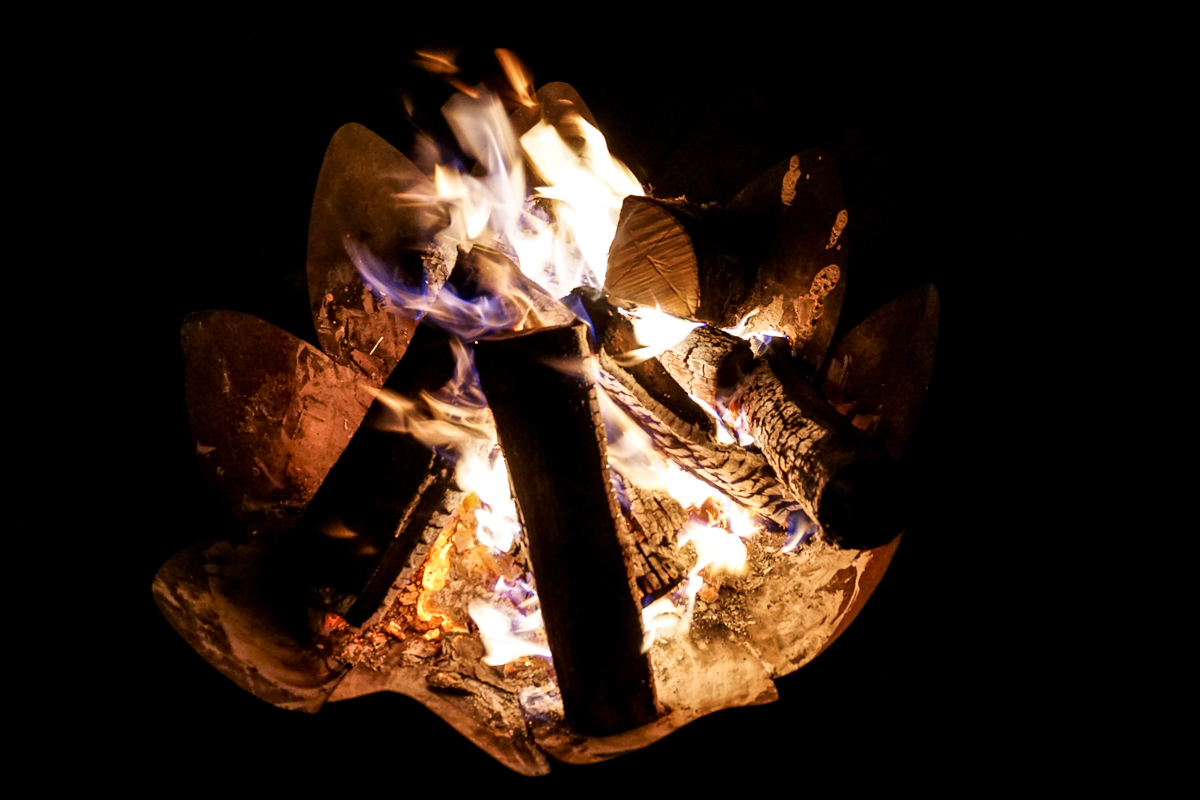 Where to stay at Lake Wolfgang

When visiting this picturesque region around Lake Wolfgang make sure to pick accommodation with lake view. There are a few hotels offering that luxury. Our favorite place combines traditional structures with a modern twist in addition to the mesmerizing views – Hotel Peter. It is run by Dominik and Verena two passionate Austrian restaurateurs. After managing the Hotel and Restaurant for a couple of years they decided to make their passion their living and acquired the business.

For example, you can find delicious modern dishes prepared from traditional and regional ingredients. Both together the hotel Peter & restaurant ‘Paul der Wirt’ are the perfect combination of tradition meets the modern age. That said it is our favorite place to unwind and indulge right at Lake Wolfgang. (Berni was blown away of the “Zwickl” beer which is served in cold stone beer steins). 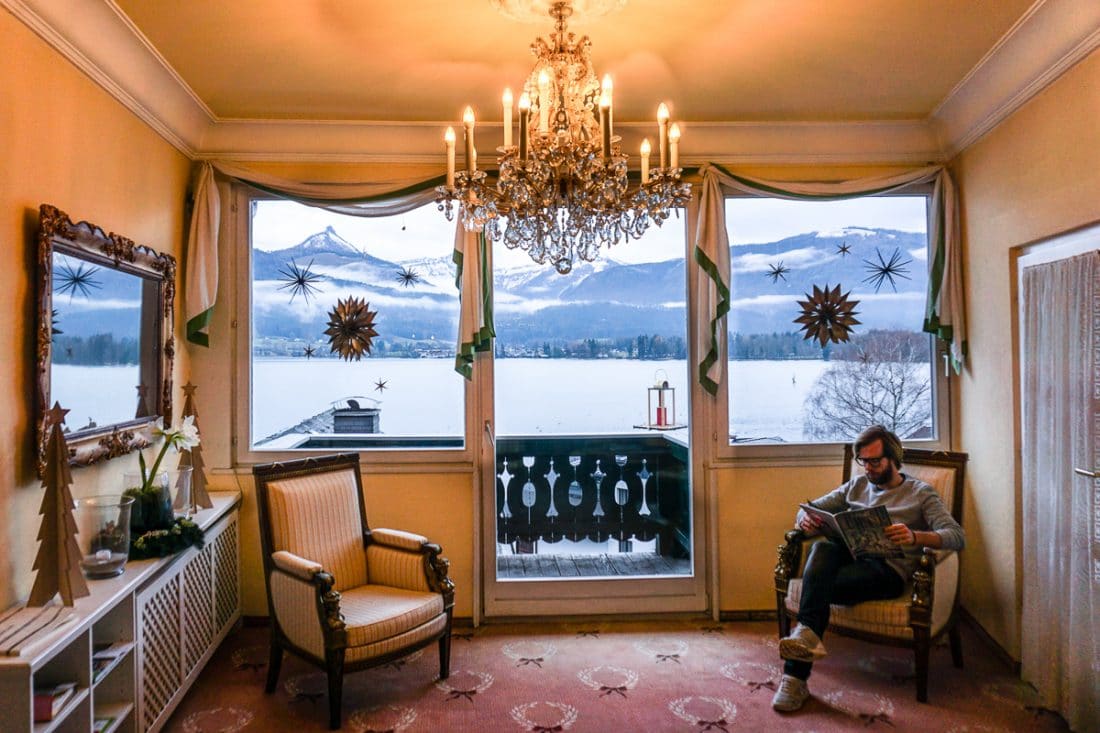 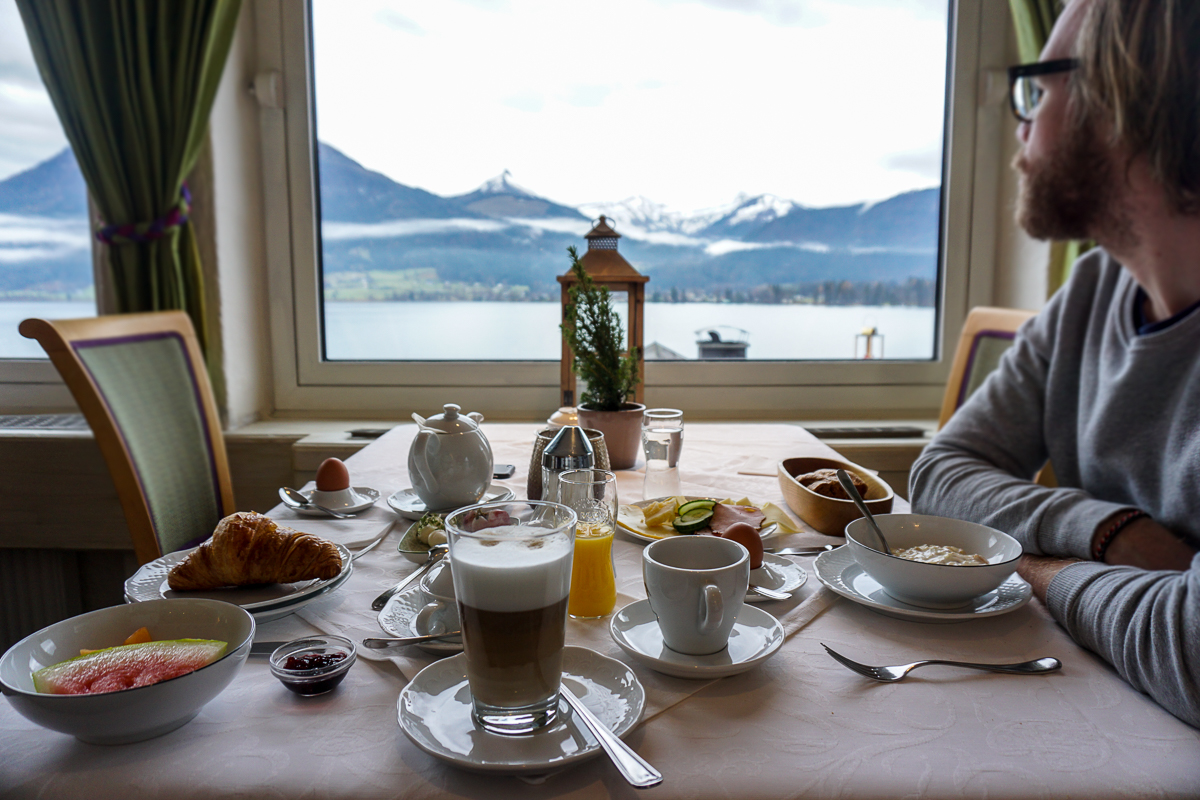 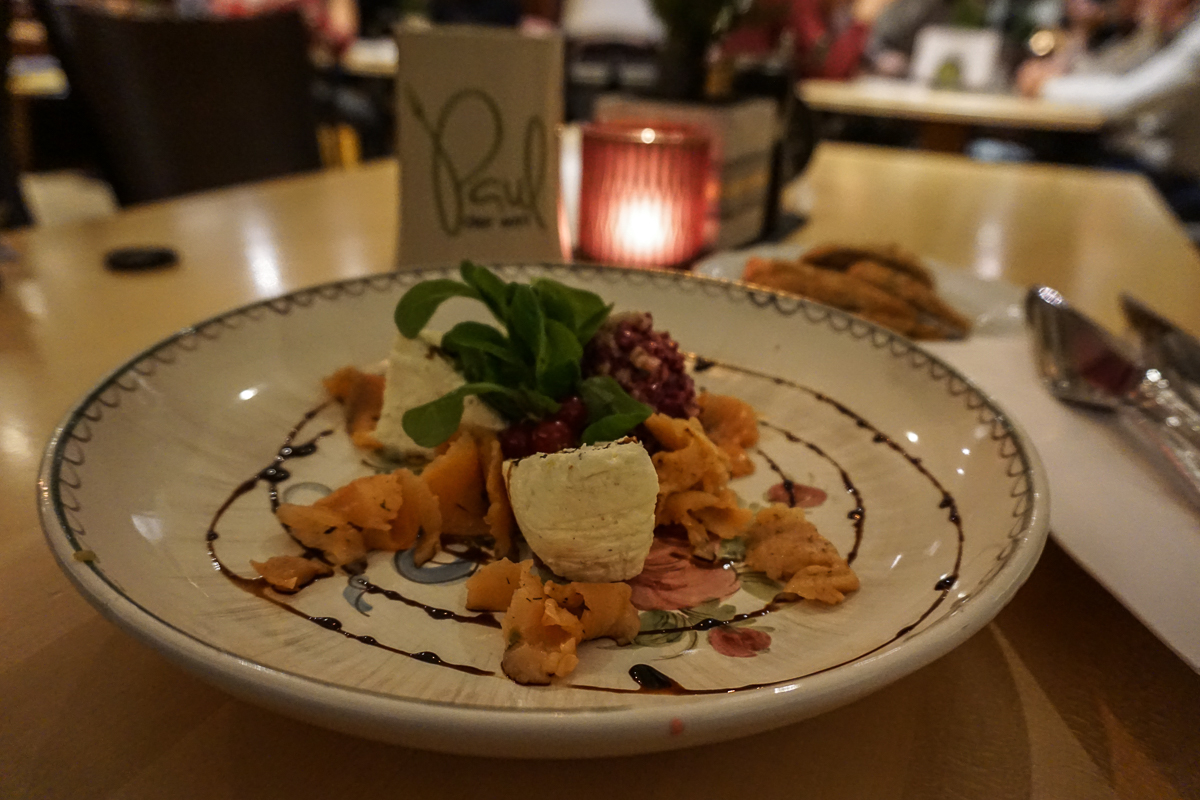 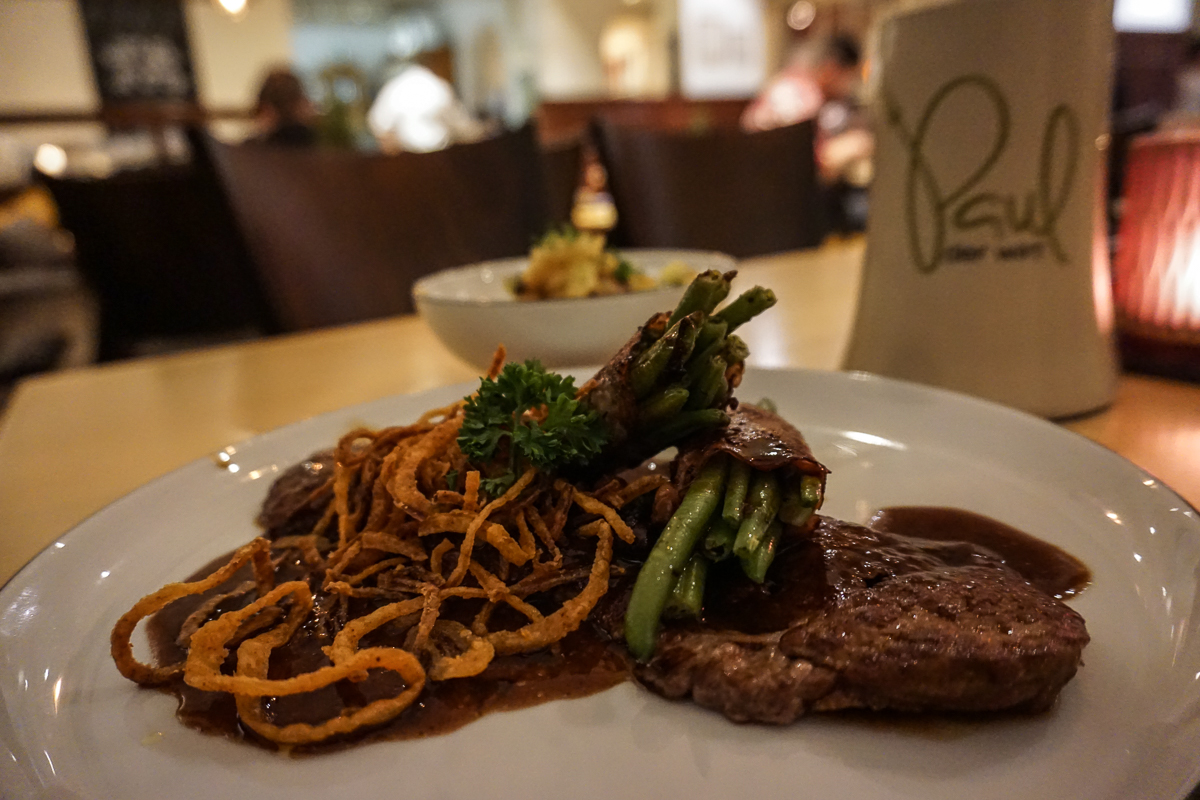 If you are wondering why the hotel and restaurant are named after traditional Austrian names – ‘Peter’ and ‘Paul’, we were curious as well. ;) Dominik told us, that the names Peter and Paul fall on the same name day but have contrary meanings. While Peter symbolizes reliability, the name Paul stands for youth. As a result, they both fit the characteristics of the hotel and restaurant perfectly.

Fun fact, after deciding on naming the hotel Peter and the restaurant ‘Paul der Wirt’ Dominik and Verena found out that the original founder of the hotel and restaurant was named Paul Peter. It seems those names are destined.

If you believe in faith check out their rooms & suites (and if you don’t do it for the mesmerizing lake view). Oh, and if you are fond of nutcrackers you should definitely go. The former hotel director was a vivid collector and you will find them all over the place (over 300 different ones). 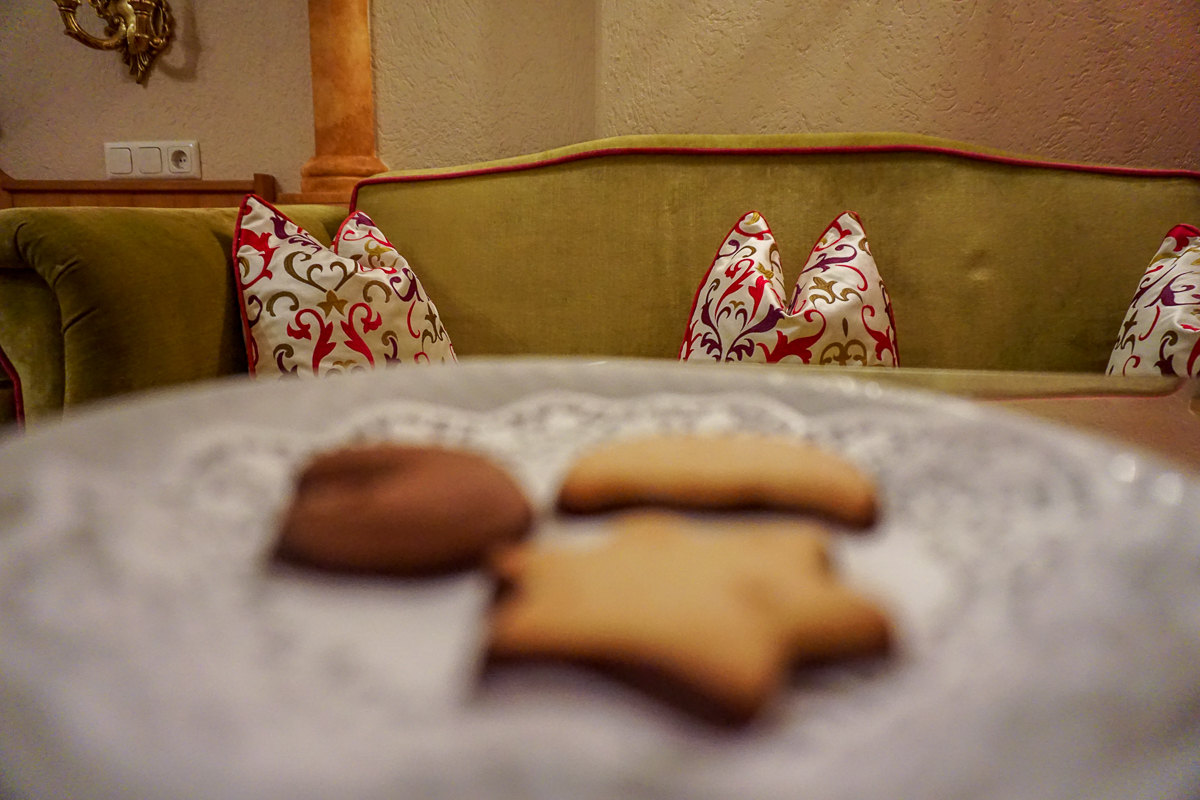 The Most Important Customs During Christmas in Austria

The Christmas season in Austria, also called Advent, begins on a Sunday 4 weeks before Christmas Eve which is celebrated on the 24th of December. That day all over Austria the first candle on the advent wreaths, woven from evergreen twigs and decorated with ribbons and four candles, is lit. On each Sunday leading to Christmas, one more candle is lit and families sing Christmas carols or pray around the wreath.

Another important role during Advent plays the Christmas tree, which is not only placed in every living room across the country but also in every town’s main square. Traditionally the Christmas tree is brought in and decorated on Christmas Eve. Decorations include candles, ornaments, stars, and different sweets. In most households, the Catholic families place a wooden Christmas crib under the tree.

A popular and long-standing tradition is a visit to one of the plenty of Christmas markets during the Christmas season. In Vienna, the oldest market dates back to 1298. Besides different hot punch flavors, gingerbread and other sweets you can find tiny shops selling traditional goods from warm winter socks to wooden made toys for children. Most markets open at the end of November until Christmas Eve. However, some continue as New Years’ markets after the 24th of December until New Year’s Eve or even the 6th of January. 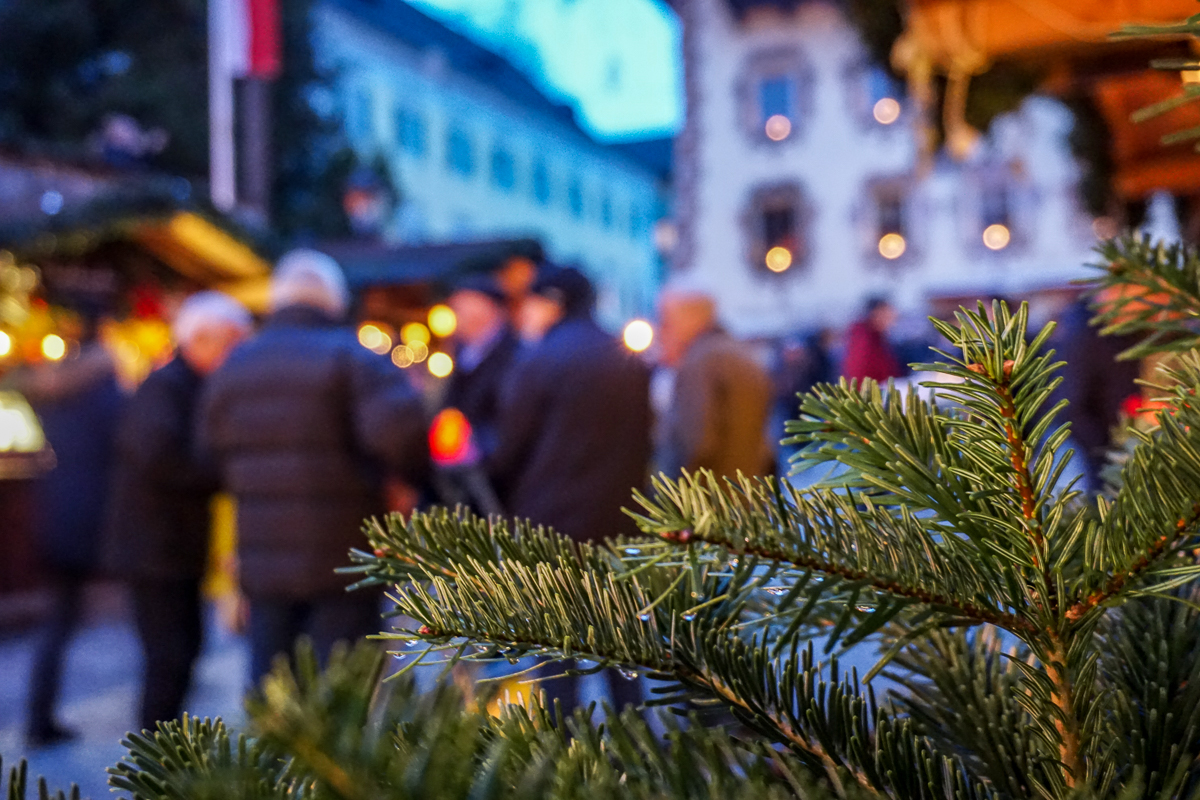 Which famous Christmas song was written in Austria?

Silent Night, one of the most, if not the most, recorded songs in the world, was written in Austria in 1816 by Priest Fr. Joseph Mohr. 1818 Franz Xaver Gruber added the music to the lyrics. The original words of the song are in German (‘Stille Nacht! Heilige Nacht’). It was translated into English in 1863 by John Freeman Young.

What is a traditional Austrian Christmas dinner?

The dinner on Christmas Eve in Austria varies a lot depending on the state and even the district. However, most commonly you will find baked carp, turkey, goose, or duck on the table on the 24. of December in an Austrian home.

Fillet the carp into 200g pieces each. Cut the skin 2-3 times, add salt and lemon squash, and leave it in the fridge for about 30 minutes. Dry the pieces and put them 1. in flour, 2. in a mixture of eggs and a little milk and 3. white breadcrumbs. Bake until golden brown. Enjoy!

Side Dish: potato or celery salad

Do Austrians believe in Santa Claus?

NO, there is no Santa Claus in Austria.

Well, you will find him in several supermarkets across the country but Austrian children do not believe in Santa. In Austria, children believe that the Christ Child (‘Christkind’) brings the presents found under the decorated tree on Christmas Eve. The Christ Child, who symbolizes the newborn Christ, is described as a golden-haired angel-like figure to whom children address their letters and wish lists in the weeks before Christmas.

However, there is a figure that might resemble Santa Claus – St. Nicholas. On the 6th of December, Saint Nicholas Day, many children receive presents or chocolates with nuts and tangerines from Saint Nicholas. The treats are usually put into their shoes. Legend has it that Saint Nicholas was a rich man who devoted his life to the poor and in his religious faith. Roaming through the streets feeding and sharing his clothes with the poor. December the 6th is believed to be the anniversary of his death.

In Austria people dressed as St. Nicholas, in a red coat with a bishop’s miter on their head are wandering from house to house surprising the children with little treats. Often accompanied by the Krampus, a big horned monster clothed in rags and carries chains. While St. Nicholas is known to bring presents the Krampus is meant to punish children who didn’t behave.

A popular custom, feared by some, is the Krampus run on the 5th of December. People dressed as horrifying Krampus are running through the streets beating the viewers with their sticks and chains.

But no worries, that is the only scary custom during the Christmas season in Austria. ;) Apart from that, it’s all about sweet hot punch, delicious traditional food, and authentic handcrafted products.

3 Days In Vienna (the Top Iconic Sights to See)